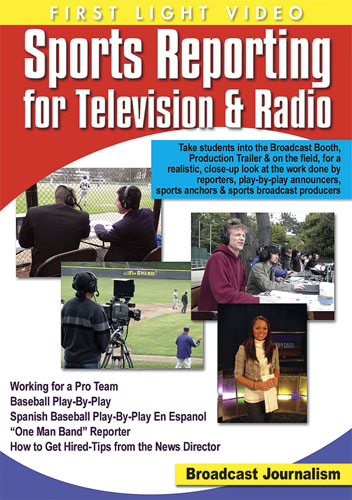 Take students into the Broadcast Booth, production Trailer & on the field, for a realistic, close-up look at the work done by reporters, play-by-play announcers, sports anchors & sports broadcast producers. This program is designed for students who want careers in sports announcing, sports journalism or for those who want to work as a Media Relations specialist for a college or professional team. This program takes students into broadcast booths and newsrooms for an inside look at what it takes to begin a career as a play-by-play announcer, color commentator, or sports journalist. Students will learn from broadcast veterans who are announcers for major league, professional teams as they share their valuable insights and experience. Working for a Pro Team: Imagine a sportscast without athlete and coach interviews. Access to the athletes and coaches is a central part of any sports broadcast. Who provides the broadcasters and journalists all the statistics and access to the athletes? It is part of the work done by the Media Relations specialists for professional teams. Learn how to get one of these coveted jobs from Abby Tomlin, a Media Relations Specialist with the Texas Rangers. Abby talks about her duties on game day and the skills needed to work for a pro team. Baseball Play-By-Play: Go behind the microphone and into the broadcast booth for the Oakland A's radio network. Veteran announcer Ken Korach gives students a glimpse at what it's like to stay on top of the action for the radio audience. Ken provides important tips for any student who wants a career as a play-by-play announcer and discusses the importance of versatility, a good vocabulary and strong work ethic. Spanish Baseball Play-By-Play En Espanol: Veteran play-by-play announcer Amaury Pi Gonzalez has seen first hand the dramatic growth in Spanish language sports broadcasting. The overwhelming majority of pro teams in major sports leagues have a Spanish language broadcast. The Spanish language newscast is the highest rated in some television and radio media markets. Amaury discusses the importance of developing or strengthening Spanish and other language skills. With one-third of MLB players from Latin America and a growing NBA presence of European players, it is more important than ever for sports journalists to have at least an understanding of multiple cultures and languages. One Man Band Reporter: Follow sports journalist Eric Hodge as he reports on a story for the evening sportscast. Eric is a "one-man band"; he reports, shoots, edits and writes his reports every day. The one-man band is a staple of small market electronic media and is increasingly being seen in larger television markets. Learn the "ins & outs" from Eric as he makes his way towards the evening deadline & delivers his finished package. How to Get Hired-Tips from the News Director: Watch as Trisha Coder, a News Director from an entry-level television station evaluates video resume clips from several hundred applicants. Trisha provides valuable tips on what will make your video stand out from the rest. This section is essential for students who are producing the "all important" resume video. Marty Gonzalez is weekend anchor of "The KRON 4 Morning News." In addition to his work at KRON 4, Gonzalez is an associate professor in the Broadcast and Electronic Communications Arts department at San Francisco State University.