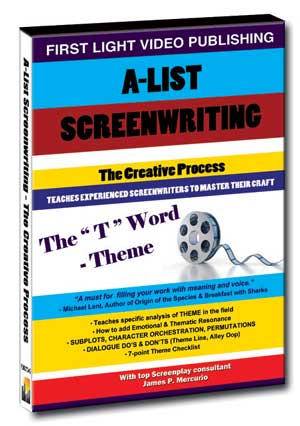 X
Please note you'll have 2 hours, 32 minutes of viewing time for this title, during the 24 hour period after your purchase.

Learn the most specific analysis of theme in the field Teaches experienced screenwriters to master their craft Ideal for directors, producers and development execs. As Hollywood uses the term, "story" is only one element of a great screenplay. Writers who have something to say about the world must learn how film and drama convey theme and ideas. Great writers seem to understand theme intuitively. They are able to achieve thematic clarity without being didactic. This program teaches how to use the tools presented in this program to add emotional and thematic resonance to your work. It shows how the intersection of all dramatic elements combines to create meaning. Subjects Covered Include: Samuel Goldwyn and Western union, Definition, Dilemma and Intersection of Possible Meanings, Subplots, Character Orchestration, Dialogue Do's and Don'ts, Permutations, Image Systems/Motifs, Right Brain versus Left Brain, 7-Point Theme Checklist, Bringing it all together. James P. Mercurio - Filmmaker & Teacher: Ranked as one of the country's top screenplay consultants, Jim Mercurio's clients include Emmy-winning and Oscar-nominated writers. He produced the feature film Hard Scrambled, starring Kurtwood Smith (That 70's Show) and Richard Edson and directed the feature March and Auteur Theory. As a teacher, he has helped thousands of screenwriters and filmmakers and shepherded over 600 short films. He has directed more than 50 hours of Educational Screenwriting programs and contributed to the bonus material for Warner Bros.' Dirty Harry series and the encyclopedia, 100 Years of American Film.

This series is one of the most advanced educations on the screenwriting craft, the business and screenwriting careers. Featuring Screenwriter, Script Consultant and Director Jim Mercurio, one of the country's top screenplay consultants who produced the award-winning feature film Hard Scrambled, starring Kurtwood Smith (That 70's Show) and Richard Edson.

"A must for filling your work with meaning and voice." - Michael Lent, Author of Origin Of the Species & Breakfast with Sharks