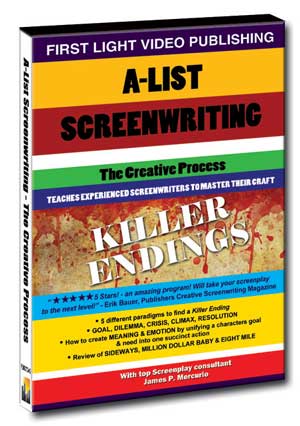 The climax of your story defines the theme, completes the character arc, creates a peripeteia and is the story's most emotionally charged moment. A great ending absolves a movie of many of its flaws. It can make a bad movie good and a good movie great. This program shows how to create meaning and emotion by unifying a characters goal and need into one succinct action - the Killer Ending. Includes discussion of contemporary films Sideways, Million Dollar Baby and Eight Mile. Subjects Covered Include: The power of endings, Definitions (Goal and Need, Dilemma, Crisis/Climax/Resolution), Five different paradigms to find a killer ending (Dilemma, Projection, Antagonist, Character Arc & Theme), Definition of Killer Endings, Applying it to Beginnings and Middles, The Writer's Dilema, Case Study - La Confidential. James P. Mercurio - Filmmaker & Teacher: Ranked as one of the country's top screenplay consultants, Jim Mercurio's clients include Emmy-winning and Oscar-nominated writers. He produced the feature film Hard Scrambled, starring Kurtwood Smith (That 70's Show) and Richard Edson and directed the feature March and Auteur Theory. As a teacher, he has helped thousands of screenwriters and filmmakers and shepherded over 600 short films. He has directed more than 50 hours of Educational Screenwriting programs and contributed to the bonus material for Warner Bros.' Dirty Harry series and the encyclopedia, 100 Years of American Film.

5 Stars! Highly recommended. A valuable tool for students and writers who want an in-depth look at theme. "This is an amazing program! Jim Mercurio's Killer Endings will take your screenplay to the next level!" - Erik Bauer, Publisher of Creative Screenwriting Magazine