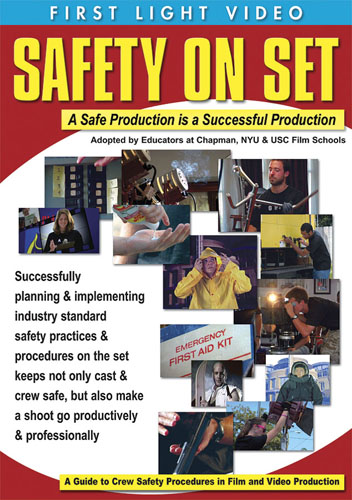 X
Please note you'll have 42 minutes of viewing time for this title, during the 24 hour period after your purchase.

A Safe Production is a Successful Production. A Guide to Crew Safety Procedures in Film and Video Production. Adopted by educators at Chapman, NYU & USC film schools. This comprehensive guide to basic safe conduct and procedures for film and video productions is an overview of Industry standard safe practices that distinguish professional film makers from amateurs. Not only will it be useful to anyone new to film production: aspiring professionals, first-time filmmakers and for educational institutions where film production is offered, it also is a review for any film or TV set where there are new crew hires, visitors or stage actors unfamiliar with the complexity of a working film set. It provides filmmakers and students with guidance on behaving safely, professionally, and with a constant eye to avoiding potential and often life threatening hazards on a film shoot. Safety should be the first concern of every crew member involved in a film shoot. The equipment used in production can be particularly dangerous and the speed and improvisation which are in the very nature of the filmmaking process puts individuals at greater risk of injury unless they are conscientious of safety at every moment. As you see in this program, successfully planning and implementing industry standard safety practices and procedures on the set keeps not only cast and crew safe, but also make a shoot go productively and professionally. This important film comes with a safety manual and checklists (available on line in the Teachers Guide section) that can be reviewed with every crew member and should be used for every shoot. Subjects covered include:Preparation For The Shooting Day, The Role of the First Assistant Director, The Safety Meeting, Proper Attire for a Film Shoot, Equipment Trucks, Moving & Lifting Equipment, Power Distribution , Stands & Rigging, Lighting Dollies, Proper Nutrition & Hydration, Working With Talent, During The Shoot, Fire, Stunts & Firearms, Meal Breaks, Company Moves, Shooting Outdoors, Heat & Sun, Rain And Weather, Working At Night, Length Of Shoot & Turnaround, The Wrap, Working with Talent, Common Sense Tips.