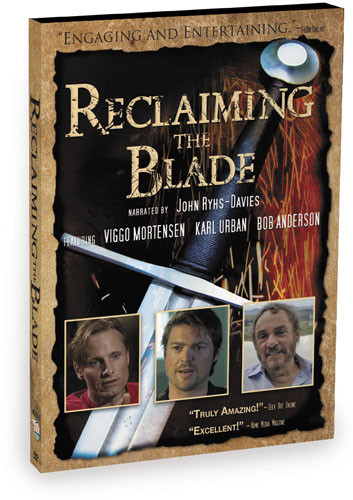 For Students of European & Asian Medieval & Renaissance History. Narrated by world-renowned actor John Rhys-Davies (Indiana Jones, Lord of the Rings). Starring Viggo Mortensen, Karl Urban, Bob Anderson. Lord of the Rings stars join with Star Wars sword-master - Bob Anderson. Reclaiming the Blade is a documentary program steeped in history, the excitement of martial arts, the culture and craft of swords and modern day fight choreography. Devoted to sword martial arts and Hollywood stunt choreography, Lord of the Rings stars Viggo Mortensen, Karl Urban, John Rhys-Davies, John Howe and Richard Taylor join with legendary Hollywood sword master and fight choreographer Bob Anderson (Star Wars/Pirates of the Caribbean) to celebrate the history of the sword. The Medieval and Renaissance blade, a profound and beautiful object hand-crafted by master artisans of old. An object of great complexity, yet one with a singular use in mind - designed to kill. The truth of the sword has been shrouded in antiquity, and the Renaissance martial arts that brought it to being are long forgotten. The ancient practitioners lent us all they knew through their manuscripts. As gunslingers of the Renaissance they were western heroes with swords and they lived and died by them. Yet today, their history remains cloaked under a shadow of a legend. This program explores both European and Asian historic swordplay and offers an in-depth look at the fascinating world of stage combat on the silver screen. It includes a long overdue tribute to Bob Anderson who has trained countless Hollywood actors and choreographed many popular movie scenes featuring the sword. From the swashbuckling of Errol Flynn and Johnny Depp to Sean Connery's knightly duels, Anderson has worked with top film talent for over 50 years. Cloaked in the Darth Vader costume, Anderson performed and choreographed all the Lightsaber duels with Mark Hamill in George Lucas' early Star Wars trilogy. The filmmakers traveled three continents over ten different countries to interview and capture demonstrations by well trained practitioners and scholars. Delving into the historical martial arts of Europe and the recently discovered ancient Italian, German and Spanish manuals of sword fighting, Reclaiming the Blade sheds new light on a hitherto shadowy subject and period of history. This program holds, that the truth of the sword has been shrouded in antiquity and the Renaissance martial arts that brought it to being, are long forgotten. The film poignantly portrays the link between yesterday's history and tomorrow's future by reaching back in time to learn what they can from the ancient swordmasters. Dedicated to the modern practitioners and academics who seek to preserve the ancient traditions."

I've had the honor of working with Bob as my sword master... and I learned a lot, not just about sword fighting but about being a man ... and having a respect for the weapon. - Actor Viggo Mortensen. "Incredibly entertaining." - AMC Filmcritic.com. "Excellent!" - Home Media Magazine. "Sensational & long overdue!" - IGN, DigiGod.