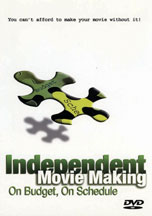 X
Please note you'll have 6 minutes of viewing time for this title, during the 24 hour period after your purchase.

SAVE $20! 3 DVD SET (Money, Crew & Breaking Down The Script) 5 Hours ONLY $179.50. A must see for aspiring and established film makers. You can't make a film without a budget - this series is a fantastic primer on Budgets for Film for Real-World filmmaking taught by filmmakers. An important tool you can't afford to make your movie without! Diane Cornell, DGA Unit Production Manager, Line Producer and Producer solves the puzzle of on budget movie making with real world knowledge and practical experience. This comprehensive series covers everything from pre-production through post including, choice of script, budget breakdown, common budgeting pitfalls, working with your director for maximum efficiencies and impact, shot lists, equipment estimation and developing a strategy for your budget design. Question and answer, open mic discussions are included with the filmmaking audience providing real life answers to decisions that affect cost, production value, safety issues, personnel motivation and management. Comes complete with budget sample with a script for the breakdown process. Set includes: Disc 1: Money & Financing - Politics of money, Your script, Budget strategy, Financing, Unions, The crew, Loss & damage, Bonds-contingencies, SAG Production reports, Set safety, Sexual harassment, Animals & children on set. Disc 2: Promoting & Motivating Your Crew - Actors, Networking & reputation, Getting Started in Film, Line producer, The job of the UPM, Keeping costs low. Disc 3: Breaking Down Your Script - Script timing, Title and script clearance, Review of the one line, The call sheet, Daily production reports.