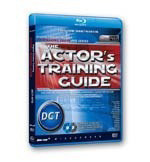 X
Please note you'll have 4 minutes of viewing time for this title, during the 24 hour period after your purchase.

Explores the process of discovering and preparing a character for film with acting instructor and coach, Stephen Heu. Students will prepare, rehearse and perform a scene from the script titled "THE CAMERA". Lesson segment includes: The Audition; the Sides; the Look; the Script; the Process; exploring the Character; finding Identity; Believability and the Organic Performance; the Struggle; Impressions and the Seasons; Subtext, content underneath the spoken dialog; Empathy, Living the moment; Inspiring other actors; Slowing down; Exercises; How to not abandon the character; Working on lessons; Honing our craft; The actor's goals and the audience's goals; Loaning emotions to a character; Catharsis; Dealing with separation anxiety; Stage and Film acting differences. Performance segment includes: Holding the last look; Slowing down, taking a beat; Matching other actors' level; Retrieve then speak; Controlling the words; Proper breathing; Right to speak; To edit, criticize, or judge an actor; Stretching the emotion; Muscle for Continuing; Looking at an actor as part of the whole script, as part of your own emotional process; Involving the character; Intuition; Learning the process of rehearsal and abandoning the script; Find where your gifts are and utilize them to the fullest; Sharpening your tools; Understanding the process and the script, internalizing the information and LIVING the characters; using blocking to convey emotion.