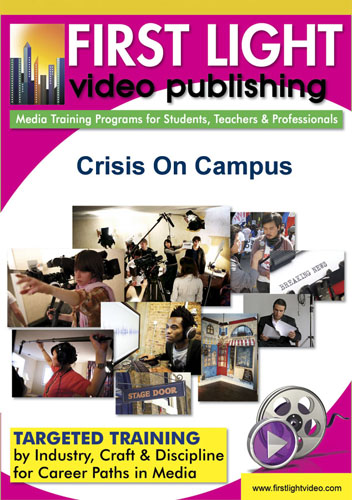 X
Please note you'll have 1 hour, 20 minutes of viewing time for this title, during the 24 hour period after your purchase.

Crisis On Campus is an exciting editing exercise from the producers of "The Hold Up." It is specifically designed forbroadcast journalism students, but will be useful for all students of editing technique. This realistic simulations of a major breaking news story is played out by the students, faculty and staff of the University of New Orleans, SWAT Team and professional crews from two local TV stations. The core of "Crisis on Campus" is 40 minutes of rushes, available in VHS or 3/4" which students can use to edit their own version of the story. The footage includes complete coverage by the two news teams, aerial footage from the helicopter and "shaky-cam" coverage from the home video camera. Interviews include the University Chancellor, the Director of Campus Police, the SWAT Team coordinator and Public Information Officer, friends and relatives of the perpetrator and the hostages and students caught in the crossfire. Voice-over and stand-ups by reporter Noel Osigian are also provided. To make the exercise most meaningful and realistic, it is recommended that each student editing "Crises on Campus" create and record his or her own story and stand-up's. Editing possibilities are virtually limitless and will depend heavily and realistically on the "time-slot" allotted to the story by the instructor. The "Crises on Campus" package also includes a 12-minute introductory video hosted by former ABC foreign correspondent and anchor Richard Anderson, that presents the basic situation and uses the "Crises on Campus" material to demonstrate the best use of video coverage, sound bites, reaction shots, stand-up's and natural sound. Features of the program: Presents two ways the rushes could be edited:As a breaking story for the six o'clock news, featuring live coverage from the scene or As a wrap-up on the eleven o'clock news after the crises has been resolved. PROGRAM HIGHLIGHTS: Brilliant but unbalanced physics major Jimmy Jerrold, his body wired with explosives, is holding two hostages on the roof of the University Performing Arts Center. As a helicopter and a SWAT Team with armored personnel carrier converge on the spot, Jerrold panics and opens fire on students in the quad below. Two news teams and a passerby with a home video camera capture the chaos and the tense negotiations that finally lead to Jerrold's surrender and the safe release of the hostages.