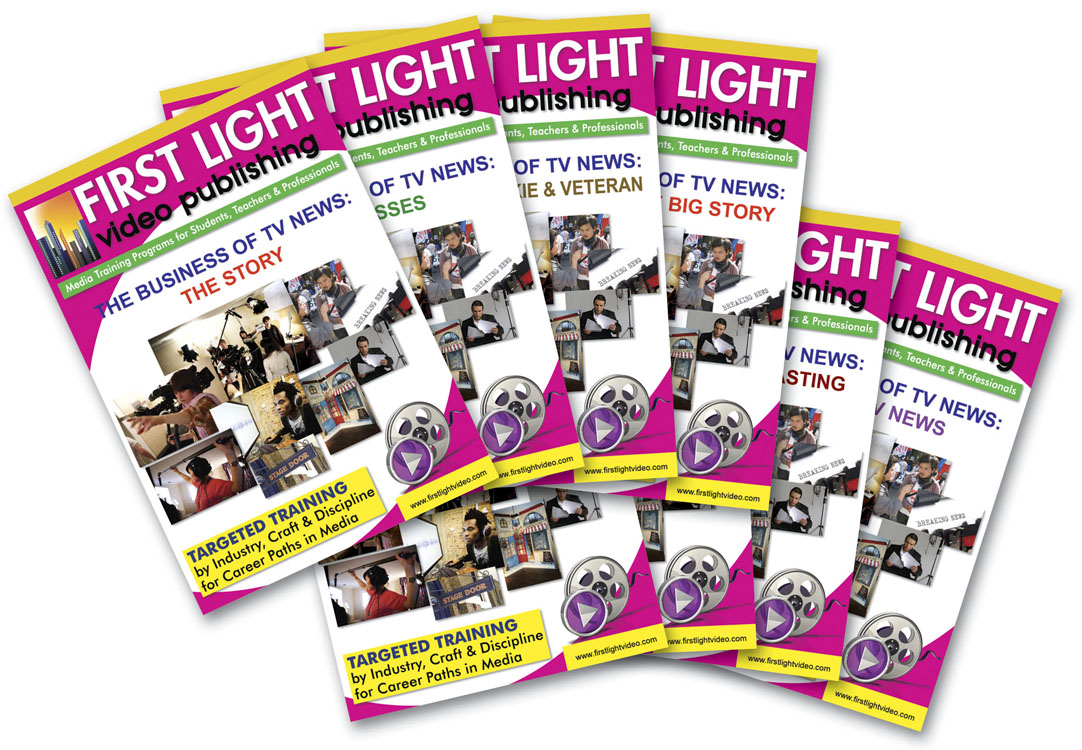 X
Please note you'll have 12 hours of viewing time for this title, during the 24 hour period after your purchase.

SAVE $80! Get the Complete 8 DVD Set ONLY $639.60! Valuable For Students Ready to Enter TV Broadcasting. This series takes you beyond the text book, beyond the classroom and directly Behind the Scenes of TV news, revealing not just the triumphs of news reporting but the failures and problems too. Learn from broadcast veterans with over 300 years of cumulative experience who tell students just what it takes to succeed and what the future holds for careers in TV. The series is designed for those who want to be in the field of TV reporting and features interviews from first time reporters, discussing what the job entails and what to expect at your first station. The purpose of this series is not to teach students how to be on television but to be in television. Each program features interviews, film clips, anecdotes & industry tips for students of broadcasting. The Story: Follow two stories from assignment to air showing the contrast between the rookie and the veteran - First year reporter Robert Hughes (KWST, Yuma, AZ) and KGTV San Diego's Sal Rivera, a 20 year veteran. Watch carefully how the rookie and the veteran turn their story assignment into a broadcast package but more important listen to what each reporter and their photojournalist have to say about this business called TV News. Meet the Bosses - Bill Lord, WJLA Washington DC, Steve Cohen, News Director KUSI San Diego, Christine Miceli Exec Producer-KTLA Los Angeles, John Coleman Weatherman KUSI San Diego (55 years in business- created the Weather Channel) Andrew Wyatt GM, KWST Yuma, AZ. Shannon Maze ND KWST Yuma, AZ and David Plummer VanderPloeg News Operations Manager, KUSI San Diego. These are the veterans, the bosses, the suits. They have done it all and are about to give you their take on TV news today and its future, what they look for in a prospective candidate and what they expect. Take notes because what you're about to hear is priceless about making interesting, compelling news. The Contract: The all important contract with famed broadcast attorney Bob Teaf and Small Market News Director Shannon Maze KWST Yuma, AZ. After years of education, internships and sending out hundreds of demo tapes, you get your first job offer. It's very exciting, but with that job offer comes a contract, likely asking for many years of your career life. Like buying a new car you may soon experience buyer's remorse. In this segment Bob Teaf and Shannon Maze review typical contract points and give you invaluable advice. Making It: With Frank Buckley KTLA Los Angeles Anchor and Cambi Brown first year reporter KWST, Yuma AZ. Move away from home to a small market station being paid little to nothing, move up from that first tiny station to become a CNN correspondent or become a reporter and anchor in the number 2 market in the country. First year reporter Cambi Brown shares her story of tears, frustration and triumph and in Los Angeles KTLA's Frank Buckley, tells his story of how he rose to the top. The Legend Stan Chambers - KTLA - 61 year news reporter veteran. Believe it or not there was a time when TV News had no established formats, no set rules on how to cover a story, no tried and true formulas. Live reporting was unheard of until this reporter came on the scene in 1947 and changed the face of TV news forever. This is the story of Stan Chambers, America's pioneer of TV News and why you need to learn from this amazing individual. Covering The Big Story: Kevin Reece Reporter KHOU CBS Houston Texas is interviewed on location at the site of Hurricane Ike. It could be an earthquake, a tornado, a plane crash or possibly a hurricane.... at some point in your career the big story is going to break and you better be prepared to tell it .....and tell it well. Reporter Kevin explains his approach to the Big Story and how he prepares and delivers. Sports Broadcasting: Revealed with KUSI's Sports Director Paul Rudy. The TV newscast can be nothing but crime, fires and robberies until we get to the fun and opinionated portion of the news - Sports. In this segment we catch up with one of the best in the field - Paul Rudy, with a look at his life and how he does what he does each and every night to excite viewers in the TV sports world. Learn from a real pro! Editing TV News: Joshua Sheehan Chief Editor, XETV San Diego, Austin Hill 2nd year news editor, XETV, and Andy Neil, former Chief Editor XETV, now Hollywood Editor. The smiling anchors, made up and poised are ready to introduce today's news, but nothing gets on the air until the stations storytellers have done their job - the editors, the gatekeepers of TV News. In this segment we learn how the unseen creative brains behind the news, Joshua Sheehan, Andy Neil and Austin Hill, create compelling and watchable stories.