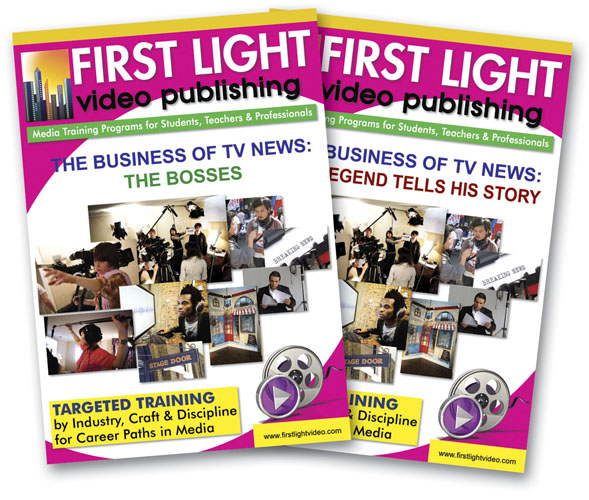 SAVE $10! Get the 2 DVD SET (The Bosses & The Legend) ONLY $169.90! Valuable For Students Ready to Enter TV Broadcasting. This series takes you beyond the text book, beyond the classroom and directly Behind the Scenes of TV news, revealing not just the triumphs of news reporting but the failures and problems too. Learn from broadcast veterans with over 300 years of cumulative experience who tell students just what it takes to succeed and what the future holds for careers in TV. The series is designed for those who want to be in the field of TV reporting and features interviews from first time reporters, discussing what the job entails and what to expect at your first station. The purpose of this series is not to teach students how to be on television but to be in television. Each program features interviews, film clips, anecdotes & industry tips for students of broadcasting. Features: Meet the Bosses - Bill Lord, WJLA Washington DC, Steve Cohen, News Director KUSI San Diego, Christine Miceli Exec Producer-KTLA Los Angeles, John Coleman Weatherman KUSI San Diego (55 years in business- created the Weather Channel) Andrew Wyatt GM, KWST Yuma, AZ. Shannon Maze ND KWST Yuma, AZ and David Plummer VanderPloeg News Operations Manager, KUSI San Diego. These are the veterans, the bosses, the suits. They have done it all and are about to give you their take on TV news today and its future, what they look for in a prospective candidate and what they expect. Take notes because what you're about to hear is priceless about making interesting, compelling news. The Legend Stan Chambers - KTLA - 61 year news reporter veteran. Believe it or not there was a time when TV News had no established formats, no set rules on how to cover a story, no tried and true formulas. Live reporting was unheard of until this reporter came on the scene in 1947 and changed the face of TV news forever. This is the story of Stan Chambers, America's pioneer of TV News and why you need to learn from this amazing individual.