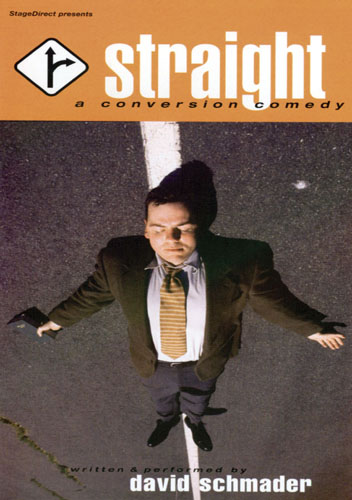 X
Please note you'll have 3 hours, 20 minutes of viewing time for this title, during the 24 hour period after your purchase.

"Fabulously intelligent, witty... and important." - San Francisco Weekly. "Exacts sweet revenge... with wit, style and the occasional flash of naughtiness."- Los Angeles Times. Straight is a hilarious and subversive excursion into the world of conversion therapy, where gays and lesbians are reputedly "cured" of their homosexuality and made "straight." Join acclaimed writer/performer David Schmader as he plunges into the heart of this dangerous territory. Schmader, a gay man, pulls no punches with either the conversionists or the gay community in this one-man show -- attending sessions with a German psychoanalyst, going undercover at "ex-gay" support groups, and engaging in an intensive crash course in Christian heterosexuality ... deep in the heart of Texas. Straight pulls no punches. Schmader deploys a wry honesty that spares neither Christian conversionists nor the unconverted in this uproarious take on sexual reprogramming. Blending an essayist's insight with the spark of stand-up comedy, Schmader confronts difficult questions, rejects easy answers, and gets to the bottom of what it means to be "straight."