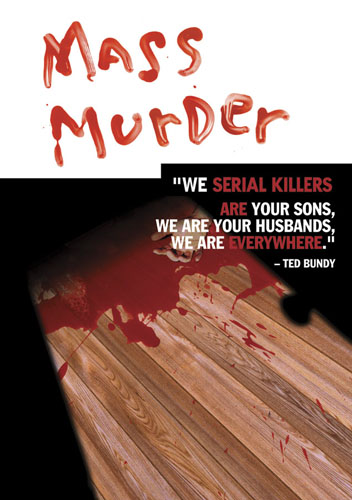 X
Please note you'll have 2 hours, 52 minutes of viewing time for this title, during the 24 hour period after your purchase.

"Recommended." - Library Journal." ... an intense one-on-one encounter with a series of five serial murderers. This program provides an in-your-face quality I would have missed from the back row of a theater. I was spellbound." - Wall Street Journal. Spend an intimate evening with the twentieth century's most notorious serial killers, including Ted Bundy, Richard Ramirez (the "Night Stalker"), and Aileen Wuornos (America's First Female Serial Killer"). We serial killers are your sons, we are your husbands, we are everywhere. And there will be more of your children dead tomorrow. - Ted Bundy. You are the jury they never got to address. You decide what is true and what is a lie. Now it is only you and the killer. Mass Murder is true crime at its best, an intense examination of psychopathic denial mixed with chilling confession. It is a window on the soul of the demented and a mirror before the face of the seemingly normal... a savage indictment of society and a testament to justice done. The Seattle Times praises the "fine acting and occasionally brilliant writing" of Mass Murder and calls it "an intense and, at points, extremely disturbing work" that "achieve[s] a rare squirm factor." "This is potent theater," Willamette Week raves, "Meyers and his fellow writers give voice to our twisted icons. Far from crazed heroes they are the off-scourings of a brutal culture; mad cousins kept in America's attic. All the monologues are strong." "Engaging. It's also disturbing," The Oregonian says, "The writers take advantage of this material to get at the key issue - why - and concoct some vivid stage moments onstage." "Mass Murder is deliciously dark fringe theater at its best.... Fine acting and intense monologue bring unmistakable electricity to the stage and the killers portrayed ... Eric Mayer effortlessly held me in his spell, as he captured Ted Bundy's boyish charm, attractive exterior and the emptiness, frustration, and hatred, which simmered beneath his outer surface ... This exceptional film will leave you with an object lesson of how little you need for terror beyond a darkened stage and a serial killer's presence." - Serial Killer Archive. Ted Bundy: The picture of an All-American boy. Charming, soft spoken and handsome. The brutal murderer of at least 28 women. Genene Jones: A tender and devoted neonatal nurse in whose loving care 47 newborns mysteriously died. Andrei Chikatilo "The Red Ripper": To compensate for his impotence, the murder of 56 people supplied the erotic charge he could not achieve through sex. Aileen Wuornos: Heralded by the tabloids as 'America's First Female Serial Killer,' she claims to have killed seven men in self-defense. Richard Ramirez "The Night Stalker": Unrepentant, hard-rocking, brutal. He claimed to do the bidding of Satan, outraged the jury with his behavior in court and ended up receiving the death penalty.