Home Media Arts Theater, Performing Arts American Contemporary Theater Jokes and Their Relation To The Unconscious A Comedy to End All Comedy 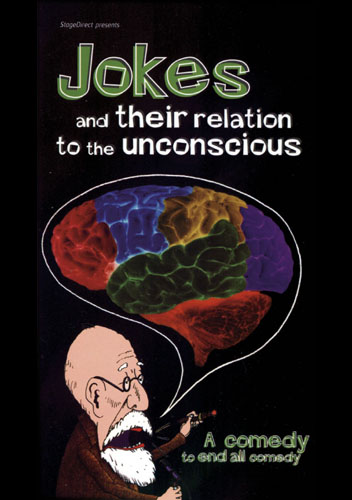 X
Please note you'll have 2 hours, 46 minutes of viewing time for this title, during the 24 hour period after your purchase.

Chicago's Neo-Futurists, aided by fellow assassins Sigmund Freud and Uncle Miltie, attempt to kill comedy by explaining why it's funny - which only makes it funnier. "An intelligent examination of what makes people laugh and one that actually makes people laugh." Apollo Movie Guide. "...one of the most inventive pieces the company has produced ....it's all hilarious." -Chicago Tribune. "... at once a very funny lecture on comedy, a shockingly serious comedy revue, and a heartfelt meditation on Freud and human psychology." -Chicago Reader. The Mission: To Kill Comedy For All Time. The Assassins: Sigmund Freud, Henri Bergson, and Uncle Miltie. The Reason: Because it amuses them. Join The Neo-Futurists, one of Chicago's most daring and inventive stage companies, as they pick the lock on your brain's humor vault. And attempt to render comedy unfunny... by explaining why it's funny. Which, of course, only makes it funnier. And even funnier. By discussing and demonstrating, disemboweling and dissecting, theories of humor from Freud to Berle, The Neo-Futurists aim to put the final nail in the coffin of comedy, drive a stake into the heart of humor, lay funny out on a board and administer its last rites. Masterful and moronic, scholarly and scatological, learned and loutish, Jokes and Their Relation to the Unconscious will raise your consciousness and lower your brow. Sex, farts, profanity - Greg Allen's scalpel lances each of these boils on the bottom of comedy. Press your nose against the cracked dark glass of your mind's sick little storefront. Then mount the couch for Jokes and Their Relation to the Unconscious! "'Jokes and Their Relation to the Unconscious' is one of the most inventive pieces the company has produced. Before you realize it, you're a participant in a variety of experiments that explain comedic tension and response. And it's all hilarious."- Chicago Tribune. "The Neo-Futurists have a knack for finding the funny in even the most serious issue... Subtitled 'a comedy to end all comedy,' this hour-long piece is at once an eccentric, sometimes shockingly serious comedy revue and a very funny lecture on comedy.... ...Allen states very clearly the questions he will be exploring, which he writes on a board: 'What makes something funny? When does something stop being funny? What makes something stop being funny? Can that something ever be funny again? ... However, in answering these questions, Allen, Riordan, and Andy Bayiates perform more in the spirit of the Dick Van Dyke Show episode in which Rob Petrie, delivering a lecture on how we've all outgrown slapstick, proceeds to win big laughs with the silliest, most painful physical schtick (poking himself with a pencil, running afoul of a stapler, etc.)... In the end even Freud gets his due, as Allen provides a quickie summary of Freud's theories of jokes, noting that they're a 'release of psychic energy,' an outlet for repressed feelings and impulses (which is why sex and fart jokes are so popular). The funny thing is that Allen and company are most hilarious at this most serious end to their show. Even as they reveal comedy's sick, neurotic undergirding - Freud was quite clear that he thought the most successful comics, like the most successful writers and artists, were deeply troubled and divided souls - they earn big laughs."-Chicago Reader. "What you can expect are thoughtful insights on modern day living, sometimes funny, sometimes tragic but always stimulating to the mind as well as to the senses... What you'll experience is an inventive, interactive performance piece that not only breaks the boundaries of theatrical concepts but would put any college professor's teachings to shame."-Gay Chicago Magazine. "[Allen] wondered if explaining humor - making the mechanism of the joke conscious - would kill the humor. So he created Jokes and Their Relation to the Unconscious, which 'threatens to make comedy un-funny until the end of time,' he says. But guess what? The show is a hit. Instead of finding it unfunny, audiences keep laughing, as though all those dreary lectures and fart jokes were funny. Scheduled to close last week, the show has been extended...."- City Talk